A Second Look at the Vicious Cycle of Divorce

I am one of those children of divorce who grew up only to get divorced myself.  It is the typical sad story.  But then why am I so happy?

My parents divorced when I was five.  I don’t recall much, other than a hazy impression of my mother arguing with my father while he was shaving and she was teasing her hair (it was the early 60’s). It may have happened once, it may have happened nightly. After the divorce, life was different.  On Mom’s days, we rode our bikes to the Met and picnicked in the park.  On Dad’s days we played songs on the jukebox and sipped Shirley Temples at Allen’s Bar.  In some ways it was better, in some ways worse.  I didn’t have another life to compare it to.

As I approached adulthood, I sensed that my parents’ divorce could be a serious handicap to my own future happiness.  For one thing, peers and elders always reacted to my story with such fervent sympathy.  It seemed increasingly clear that I would need to overcome this psycho-developmental hurdle if I wanted to have a strong and lasting relationship myself.   So starting in college, I went to see a psychotherapist who talked to me about my relationships and what he first called my fear of commitment.   He tried hard to help me remember feelings I had about my parents’ divorce, but no more memories emerged. When, after six months I felt ready to stop, he said it was my fear of commitment surfacing, and so, to prove him wrong I stayed another year.

When I moved to the city to start my adult life, it wasn’t long before a bumpy relationship sent me back to therapy.  We talked about work, sibling rivalry and other identity issues but it seemed that the silent specter in the corner of the room was always my parents’ divorce and how to overcome its legacy.

Four years later, my therapy had ostensibly worked. I was married to a smart, funny, charming man, with an Ivy League degree and a glamorous career.  Of course, marriage had its challenges, for which the proper antidote seemed to be more therapy.  I talked and talked and talked.  Session after session seemed directed toward bringing up harrowing emotions from the year of the infamous split. I gamely went down the emotional rabbit hole each time, hoping to find the precious but elusive key that would unlock all the secrets.  But I never had a major epiphany about my parents’ divorce.

I was aware of an acutely painful longing for my father (who died five years after they split), as well as my parents’ conflicting values. I also became aware that, in order to right my own family’s story, I had chosen a husband who was as close to my own father as I could find.  My inner ambition was to try and do one better than my own mother and keep our marriage together.

And it seemed to me that I’d succeeded.  We were part of a community of “solidly marrieds.” We both felt smugly superior to our own parents’ dim self-awareness. When our kids arrived, I feared that I would be raising them alone at home while my husband continued to lead his fast paced glamorous life.  This fear was more or less borne out, but I didn’t expect be so happy at home with my kids. They made his absence more palatable.  I never felt like I was missing out not to make every single movie premiere party. In fact, I began to feel pity for the husband who didn’t recognize that his own little beings were more interesting than even the most scintillating movie star.

One day, nine years after our youngest was born, and sixteen years after we married, my husband told me he had met someone else–someone who loved his work and loved being a part of it more than I ever had. I was dumbstruck. When the numbness subsided, a deep sadness set in, and then a kind of horror.  After 22 years of therapy, after all that money, all that work on self-understanding, all that talk, talk, talk, here I was.  I was doing just what I’d been striving all those years to avoid, and just what my poor under-evolved parents had done to me: allowed our marriage to crash on the rocks.

My sense of failure and shame competed with acute self- pity. “Its so unfair,” I wailed to a friend,  “no matter how hard you work to escape it, your past just pulls you under.” But as the weeks and months went on, I didn’t go under. To my surprise, I actually felt okay, and eventually, better than okay.  I re-discovered the person I used to be before I married, before I was afraid to say precisely what I thought for fear of angering my significant other.  And during the days I suddenly had without my kids, I discovered new things I enjoyed.  My life was different, but it became a life I loved.

Not long ago, I took a closer look at some family photos on our wall and realized something I had never considered before.  All my forebears are there, and in the middle are the two women I loved most and who defined my world: my mother and grandmother. Both these women lost their husbands. My mother, a debutante who preferred horseback riding to society, was unhappy being married to my father, the tireless social compulsive. After he left, she seemed to come alive, re-visiting horses and rivers in the wilds of Colorado, traveling to Europe and the USSR, and discovering a passion for teaching that eventually led to a professorship at Columbia.  She took us on extended trips to Italy and then Ireland, where we found playmates whose fathers –with names like Aurelio and Patrick—were nothing at all like our father.  She struck us, for the next eight years, as being curious, courageous and most of all happy. Eventually, she remarried, but several years later, she became frustrated once again, sitting on the edge of our beds heaving heavy sighs of anguish and resignation. 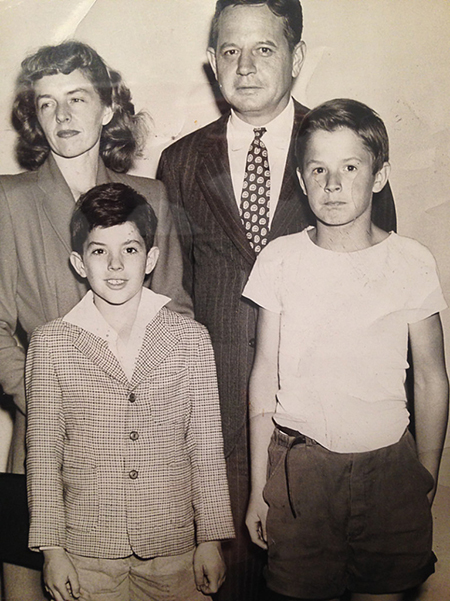 My father’s mother was a dutiful and forbearing wife, until her husband died fairly young, a victim of the hard drinking and smoking demanded by his work and country club routine. It was then, it seemed that her life really began. She traveled the world with her sketchbook and charcoals. When she came home to her St. Louis suburb, she made paintings from her drawings- of rakish Portuguese fishermen, Greek innkeepers and Moroccan fruit sellers.  There were whispers about younger paramours, but what we saw was a woman enjoying everything she did and eager to share her delights. She painted us, and gave us painting lessons.  She hosted us for weeks in the summers where we witnessed her energetic party giving and her multi-generational salon gatherings.  Like my single mother, my single grandmother seemed to be living at the top of her life.   She also married again, to a kindly but slightly scolding retired army officer.  Without complaint, she slipped back into the demure role of caretaker and plate clearer, but none of us recall dinners at her house ever being as much fun again.

It might have been worthwhile to spend some of those therapy sessions talking about why these women appeared to me so happy and fulfilled without a husband.  I might have wondered if they suffered crippling loneliness (but they had us!), or if they delighted in being married and I was simply to young to be cognizant.  I would have been open to convincing.  I still am, as I remain optimistic about finding a partner to grow old with someday.

Studies have shown that children whose parents divorced are more likely to divorce themselves, and women may be as high as 60% more likely. Until now that seemed unequivocally depressing.  But now I’m not so sure.  I’m starting to think that maybe we have just been holding up the wrong lens.