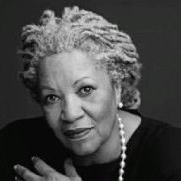 Tony Morrison married at 27 to a Jamaican architect she met while she was a student at Howard University, and divorced at 33 with one young son and another on the way. “He didn’t need someone judging him all the time,” she once said.

Her first novel, The Bluest Eye, was published in 1970, when she was 39 years old and at the time, working at Random House as an editor to support herself and her two boys.  Her perspective on divorce: “To think of something that we normally think of as failing, as useful information.”